Hello! So you won’t believe this but I’m 90% sure that now my right wisdom tooth is infected! I guess he was feeling left out and wanted to get in on the action! So now its a battle between my teeth and which side can get infected more. I’ve already had two infections on the left side so the score is 2-1. I’m on antibiotics right now! How is this happening? This cannot continue! I’m going to the oral surgeon tomorrow at 8:45am but at least this time I am anticipating oral surgery. I hope that either I’m wrong or that it won’t be too bad. I’m not really excited about recovering from more tooth issues as I go get more chemo this week. But as always, I’ll manage. I just wish someone could communicate with my wisdom teeth and tell them to stop this nonsense. Here’s how I feel about their behavior (with a sneak peak of my mysterious hair regrowth). This photo actually goes out to Maura and Abe who were big fans of my middle of the night crazy Ativan photos: 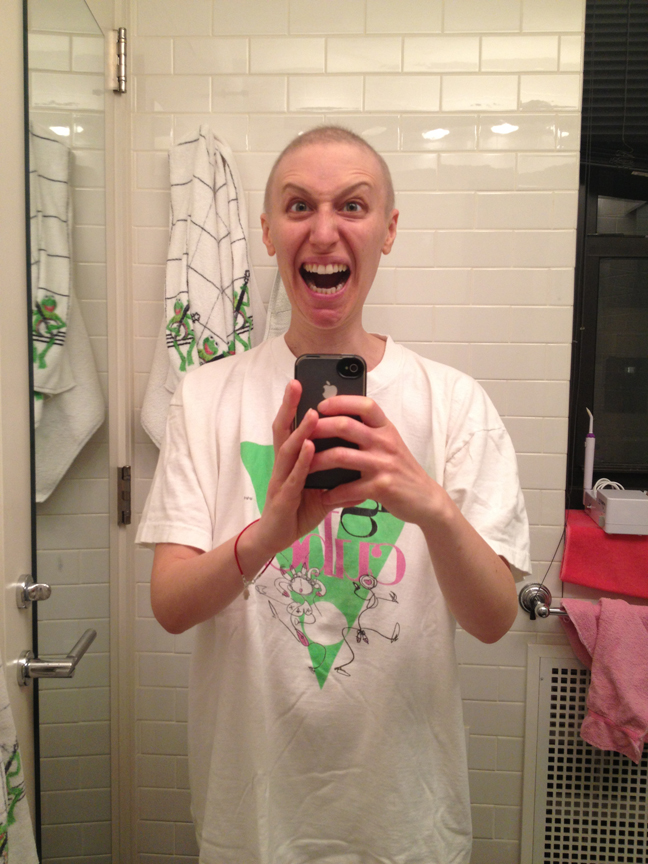 Yesterday I went to the Stupid Cancer conference which was interesting and a little overwhelming at times. I got pretty emotional a few moments and had to fight back some tears but I’m sure that’s to be expected. There were some very inspirational speakers and survivors there. I didn’t network too much but I did make a friend named Carly who also blogs! There was a whole panel about nutrition!  On the panel was a Lymphoma survivor who wrote a cookbook about how to eat on chemo and she also did Integrative Nutrition while on treatment! And there was this hilarious chef/survivor named Hans who had his stomach removed! Crazytown. But the most inspiring speaker for me was this girl named Kaylin Andres who has survived cancer three times! She was on an MTV show that documented a year of her life. She talked about the importance of sharing your cancer story and creative expression. I really wanted to talk to her at the reception but she was nowhere to be found. Here’s a great article she wrote for Huff Post. The most valuable thing I took away from the day was hearing people talk about surviving cancer multiple times or living with cancer rather than being “cured.” As hopeful as I am to be cancer-free forever, in many ways I’d rather have a more realistic outlook that allows me to live more fully in the short-term and not worry so much about what will happen or if the cancer will come back. For example, Carly who was first diagnosed 10 years ago, said that there was a period of four years when she had no cancer issues and that those years were great. I’m looking forward to having a long stretch of healthy time like that out in Los Angeles! But maybe the cancer really won’t come back based on how many delicious mushrooms I’ve been eating! Maitake, Shiitake, mmm….hahaha. After the conference, I took the East River Ferry over to my old neighborhood Greenpoint to meet some friends for dinner at Glasserie which is in a old glass factory where I had an art space back in 2005! The food was pretty darn delicious! Here’s a shot of the Brooklyn Bridge from the ferry.

I was supposed to go to that potluck for Integrative Nutrition today but decided that I needed to take a break and rest. Well, I’m off to cook some yummy food and do some meditations. xoxo Lauren

3 Responses to Right or Left?