So I hope you all had a great holiday weekend wherever you may have been! I was a busy bee because Steve was here visiting me!!! We hadn’t seen each other (aside from FaceTime) since the end of May and back then I was in a lot of pain and low on energy. But that is clearly not the case these days! The question isn’t what we did, it’s what we didn’t do! Hahaha. We walked soooo much including Central Park, Cobble Hill area, over the Brooklyn Bridge and more! To maintain our stamina we indulged in nut butter and jam sandwiches!

The night before Steve arrived I whipped up a batch of the Hazelnut, Almond Coconut butter I had made back in April because he loved it so much. His birthday is tomorrow so I wanted to add an additional surprise for him when he arrived. And then he brought me two flavors of the best jam in the universe from SQIRL. Speaking of Steve’s birthday, I had been feverishly working on many presents for him and I had to be secret about them to both him and to you! First, my brother and I went to Color Me Mine in Tribeca where I hand painted a couple bowls for him. I made one of Alf because we both love his hilarious antics and had been watching the show on Hulu when I started feeling bad back in March or April. 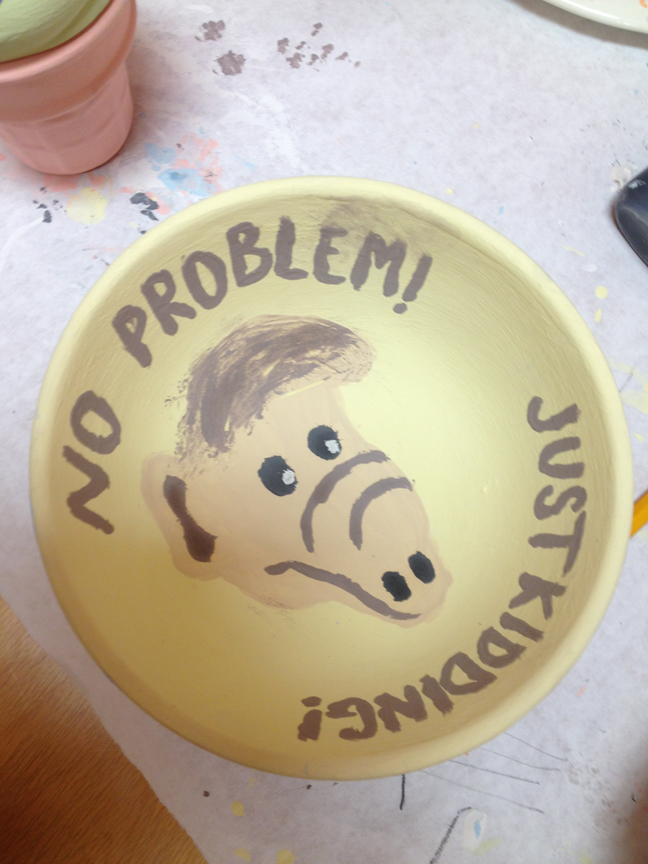 And then I made this one which is an inside joke from this guy who tried to sell us his music CDs in a restaurant when we first met! 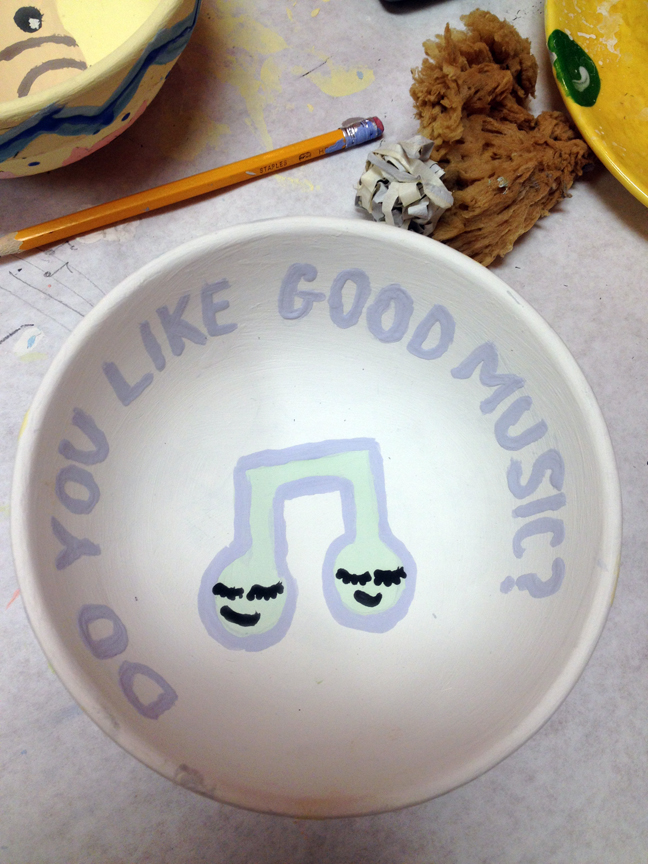 They both look more glossy now after the glaze but I forgot to snap a new photo! I also made him this insane birthday card with images I printed and cut out! Here’s the front, center and back of the card! 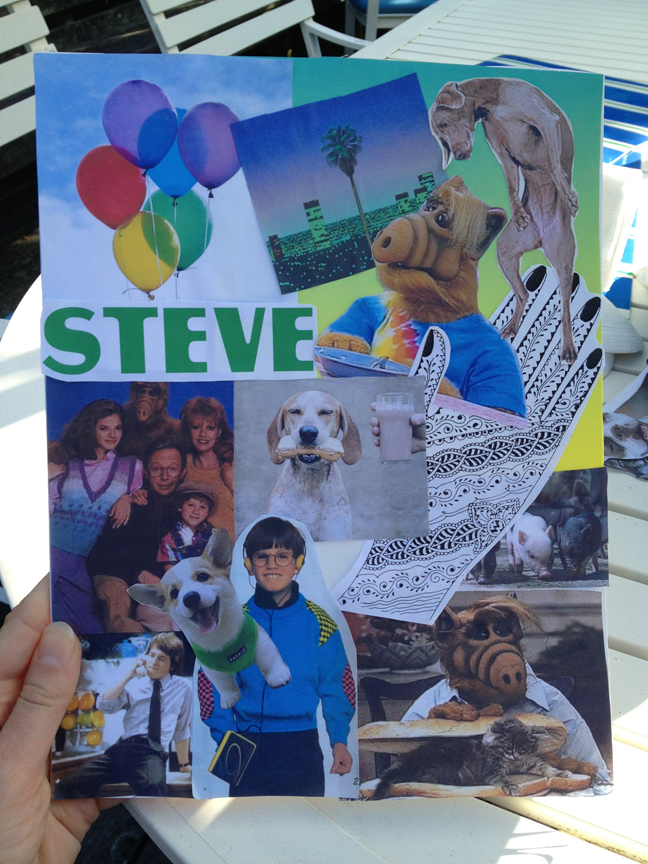 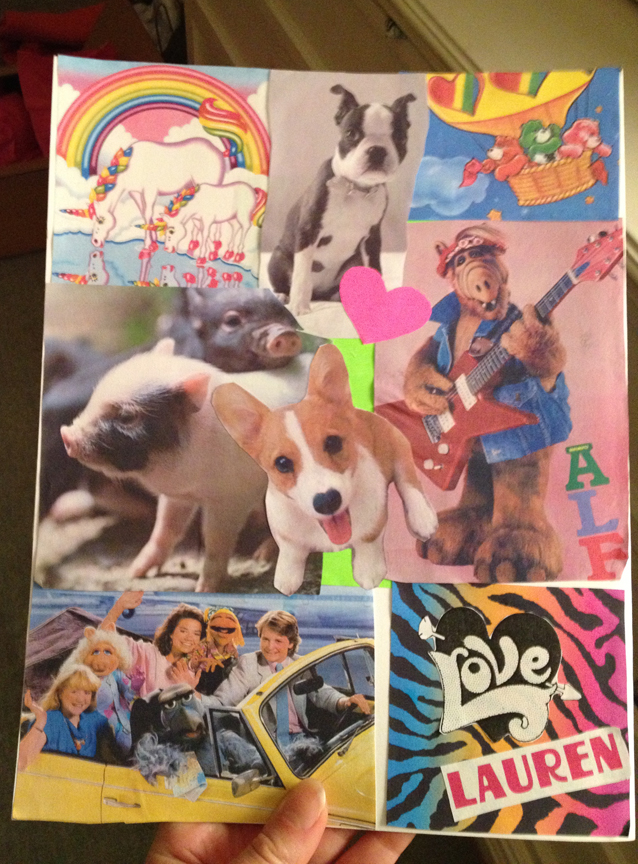 While Steve was here we ate soooo much good food (as any diligent pair of foodies would while in New York). We went to one of my fave spots from when I used to live in Greenpoint where I got the classic Acapulco Breakfast! 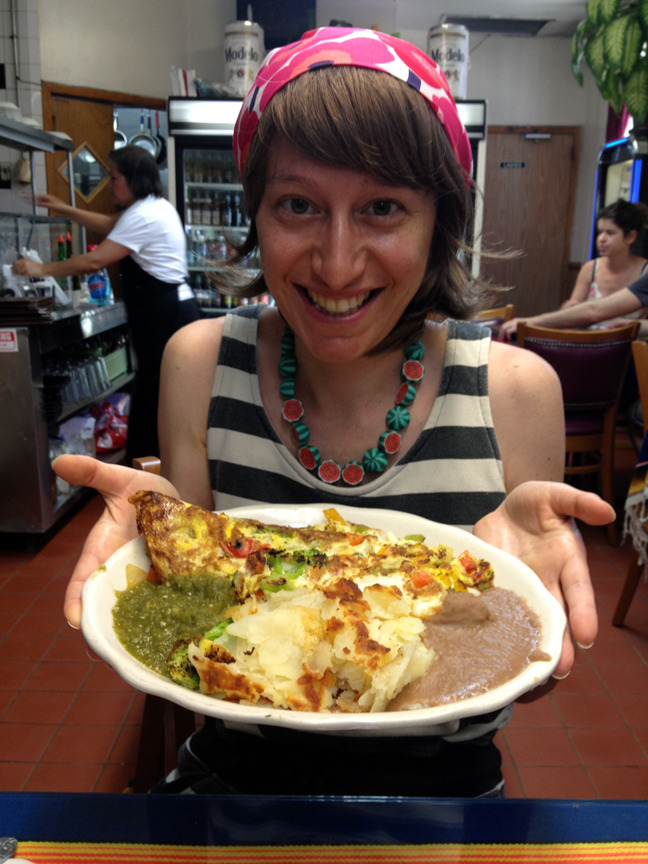 We also ate at a classic restaurant from my childhood called Cafe Fiorello. They have the most amazing thin crust pizza there. I made an another animated GIF of Steve’s reactions to it’s deliciousness.

After indulging in this pizza and chocolate mousse (served tableside!) we went to see this amazing movie called 20 Feet From Stardom that Steve is an extra in because he mixed one of the live recordings in it. It’s an amazing documentary about backup singers! I highly recommend seeing it! Then we went to watch fireworks along the west side but I couldn’t even last for all of them because my legs had given out from all the walking we had done (which for that day was probably over 5 miles)! The next day we went out to Fire Island where I made this colorful salad with food I had picked up at the Union Square Farmer’s Market. 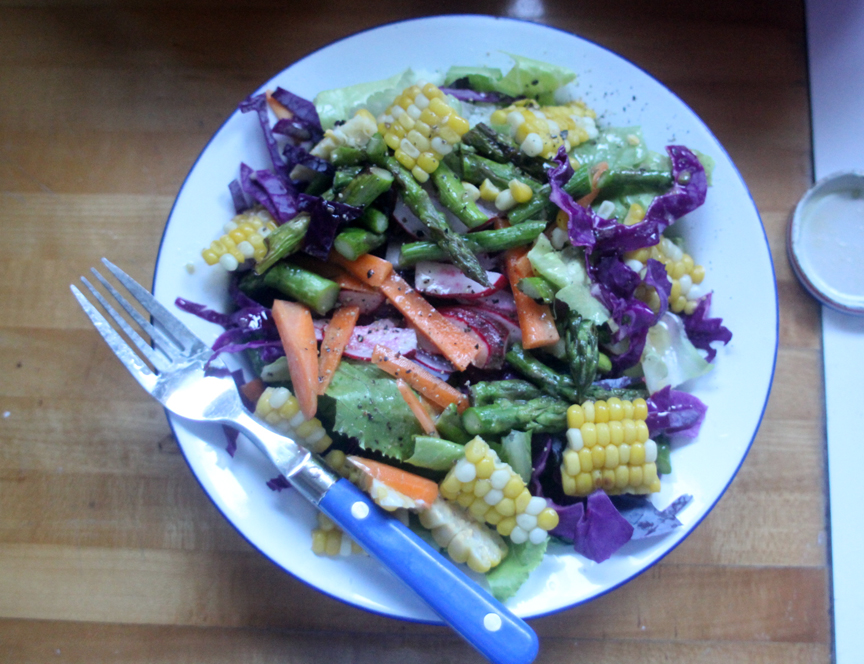 I also found some colorful finds at a local tag sale! 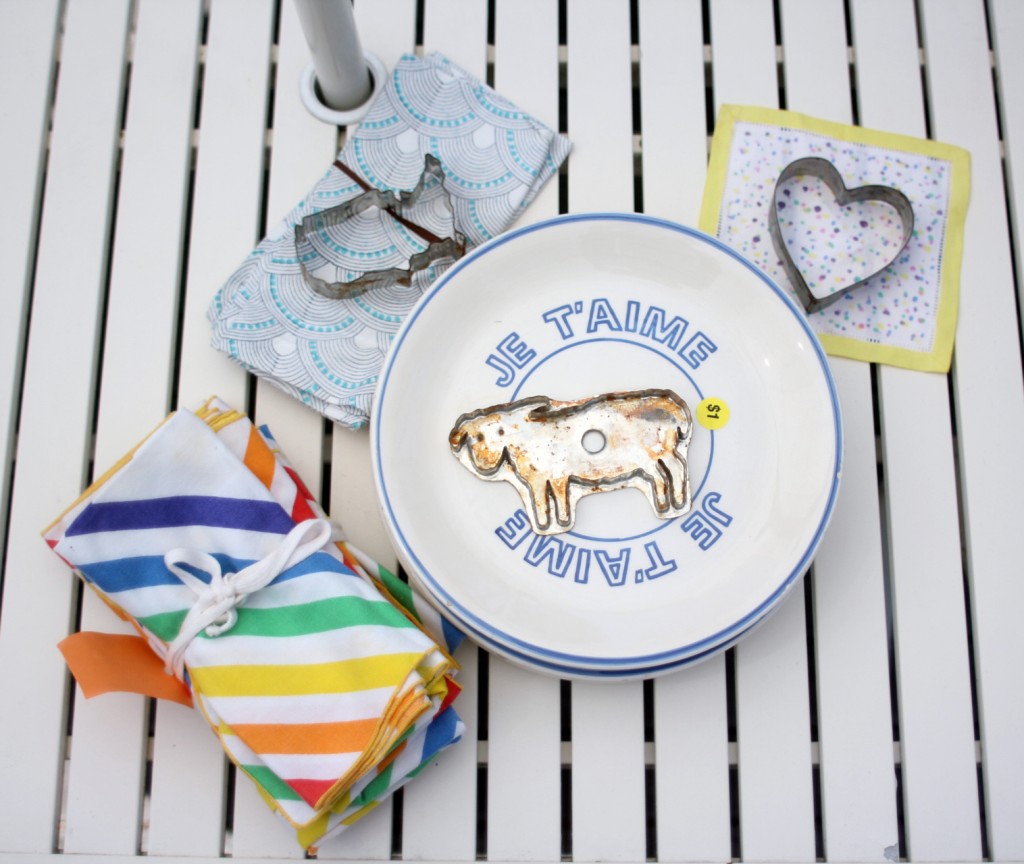 The colorful eating trend hasn’t ended. Check out this amazing lunch I ate today! Rachel is here cooking up amazing food as I write! 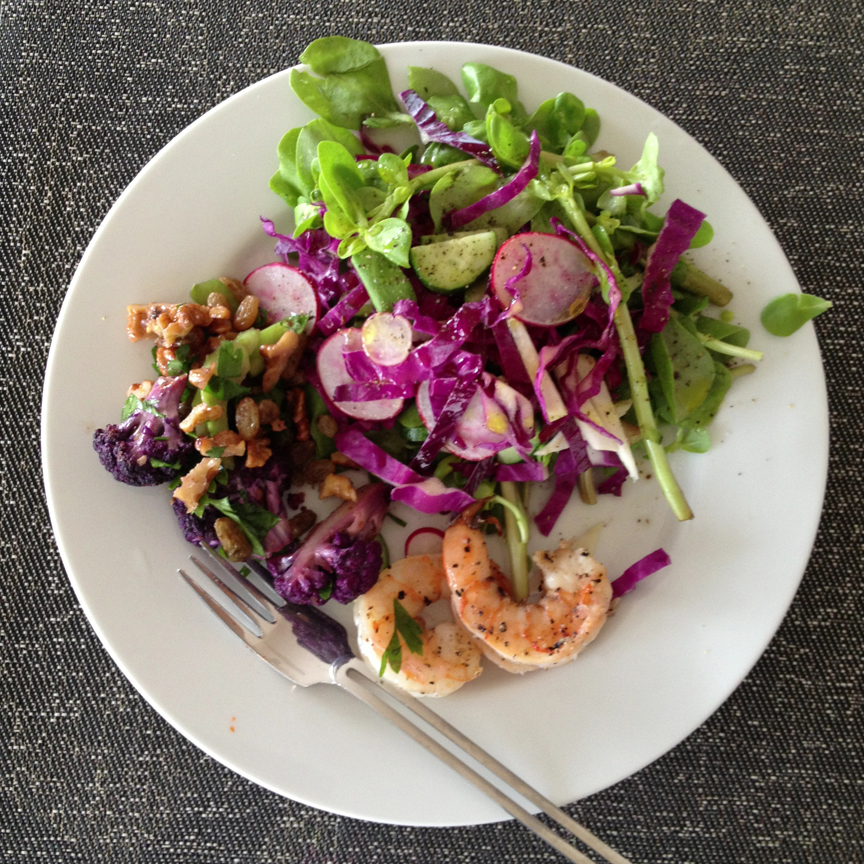 I bought some purslane yesterday at the market and she had just finished this Roasted Purple Cauliflower dish with golden raisins, celery, parsley and walnuts. Mmmmm…I’m going to be eating well this week! Which is good because I get my fourth chemo treatment on Thursday! It amazes me how much time has flown by! On the 18th I am getting imaging done to see how the treatment is working. I’m feeling like it clearly must be working but I am anxiously anticipating knowing what’s really happening inside me. My dream would be for them to say that it’s all visibly gone. Wouldn’t that be amazing? Once they do the imaging, my doctors will tell me how many more rounds they want to do. I’m hoping for 6-7 so that I can go back to Los Angeles because I miss it so much! Cross your fingers for me!

So Steve left last night and it was pretty sad walking back into my building alone after spending 5 consecutive days together. But I am thinking of planning a trip to LA next month so that will be rad! And tonight I am hosting an amazing little event at my house! One of my best friends from growing up, Amanda, knows a girl who is a make-up artist so she is going to come and teach us how to apply make-up. I really want to learn about eye make-up in particular! Stay tuned for pictures and details! Rachel made this amazing Kale Salad with Sweet Potatoes and a Tahini dressing and I am going to order pizza from this place in the neighborhood called Farinella that has Roman Style pizza so that should be deeeelish! Ciao!

One Response to Where Do I Begin?