So I don’t have a lot of time but I wanted to give you a quick update. Things have continued to be incredibly overwhelming and I don’t know how I am surviving all this but I am. Thank you to everyone who has told me they are praying for me. I really appreciate it! So we met with the Sloan doc on Monday (after waiting 2.5 hours!!!) who told us that they didn’t have any trials open for me at this time. And I told him about the trial at Mass General and he told me to do it. I started to ask him about all the different trials out there and how we were struggling to figure out which one was the best one to start with and he urged me to start the trial at Mass General. He was speaking to me on a personal/human level and told me that if I waited and did more research or tried to get into another trial that I would be hurting myself. He said that he has seen it many times and cautioned me against it. So that is what we have decided to do. The hard part for me is that over the weekend I found this trial that seems perfect for me because it’s an immunotherapy drug called Ipilimumab (who comes up with these names?) that is specifically for advanced cervical cancer at Fox Chase in Philadelphia. But to try to do that drug first would mean waiting at least another 2-3 weeks because of all the paperwork, insurance and screening process involved in joining a trial. I wish I wish I wish I had contacted Fox Chase at same time I contacted Mass General but I didn’t so we have to go from here. The doc at Sloan kept saying how it didn’t matter which one I start first and my plan now is to get everything in the works at Fox Chase so if we decide to switch, we will be ready to do so. And it seems like it’s harder to secure a spot in a PI3K trial (which is the one at Mass General) and there is no issue with getting a space at Fox Chase. I feel lucky that I have two options that are cutting edge and will hopefully save my life! Over the weekend while doing research I read too many negative sounding stastistics/prognosis for my disease and it got me into a really freaked out headspace. We also decided to see the new Coen brothers movie “Inside Llewyn Davis” which I DO NOT recommend. I just assumed I would like it because it seemed to be getting good reviews and they are my fave directors but it was so depressing and dreary with hardly any storyline or interesting characters. One thing I did learn about over the weekend is that Black Cumin seeds are supposedly good for curing cancer (especially cervical) so I got some supplements and the actual seeds too:

I had some crippling pain on Sunday that required me to take lots of narcotics and luckily the pain has subsided since then. I have no idea if its because I started taking the cumin seeds. I have to stop now because of the trial which is a bummer but I did ask about it so maybe they will let me start taking them again. I also can still eat them as food so I asked Rachel to make a curry with them in it yesterday!

So I’m about to go to Sloan to get that port catheter thing put into my chest so my veins can take a break and then, get this, we have to drive to Boston after so that I can be there at Mass General at 10am so they can draw my blood as part of the screening process. I never thought I would be traveling after surgery but this is the crazy life I am living right now and I ain’t got many choices. Before I go, I want to share with you a ridiculous and somewhat terrifying picture of myself from last night. I decided to have Matt shave my head again since it was falling out and getting spotty so we thought it would be funny to give me a mohawk. I sent it to Steve and told him I will be pretty again one day! Love to you all! Fingers crossed! xoxo Lauren 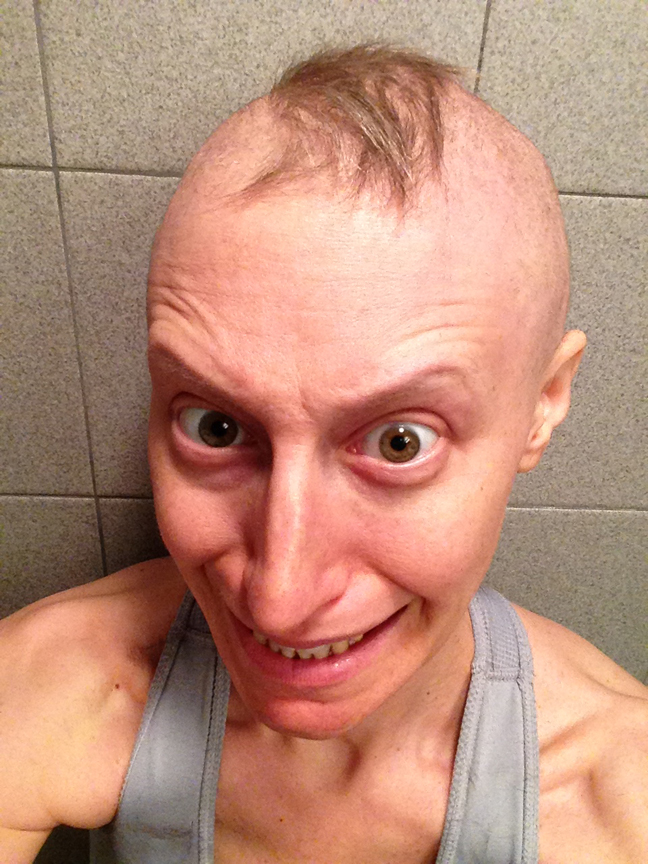 8 Responses to Here We Go