Hello my dearest readers. Well, my biggest fear has materialized. As part of the screening for the drug trial I asked them to do a brain MRI because of the weird headache I have been feeling. Unfortunately, the scan revealed a 2cm tumor in the sac that surrounds my brain. I’m glad its not in my brain but this is not exactly good news. To my comfort, the doc as Mass General was not super negative about it. He said it was a hiccup to deal with on the way to getting me back on a clinical trial or possibly chemo. He had arranged for me to meet with docs up there about some kind of radiation but instead we opted to come back to New York and meet with doctors at Sloan. Leading up to finding out the news, I was a nervous wreck. I have never been more terrified, anxious and tense in my entire life. But after the news, I have been graced with an overwhelming sense of calm that I did not expect and desperately needed to feel. Maybe it’s that I did all the worrying I could possibly do and now we just have to deal with it. Everyone says how positive I am but I don’t feel that I have actually been so positive since finding the news of the PET scan a few weeks ago. But I am definitely back on track. I owe a lot to my Mom who is always positive that I will make it through this, my dad for texting me pictures of my stuffed animals, my brother’s upbeat outlook, Steve’s smile and countless other people (basically YOU for reading this). I also cannot believe how organized and resourceful I am in terms of my medical care. Let me paint you a picture. My scan was supposed to be on Thursday but the only time we could get was 8pm and unfortunately they asked me not to use my new port until at least Friday so they had to try to access my veins. I had to go in for blood work as part of screening on Thursday morning so they thought it would best to leave a plastic IV thing in my vein for the day so I wouldn’t have to get stuck again at night especially because the IV specialist at the MRI office would be long gone by 8pm leaving only the techs to insert the IV. So to my dismay, the IV they left in my hand all day (which was pretty darn uncomfortable in addition to being sore from the port surgery) clotted so they couldn’t use it and the MRI techs tried to get an IV in twice before I refused any more sticks! So they got me an appointment for Friday at 10am. So I didn’t get the call from the doctor until 3:30pm on Friday leaving us very little time to make plans. But somehow in the span of an hour and half, I managed to get Sloan to rally for me and get me appointments on Monday with two doctors, I got the MRI imaging on a disc and picked it up (something that usually takes at least several days) and also picked up a prescription for steroids to reduce the inflammation of the new tumor in my head. It helped that we were staying in a hotel literally right next to the hospital but still I can’t stress enough how hard all that is to pull together so I have to pat myself on the back. Good job resourceful Lauren! Haha. So in addition to meeting with the docs at Sloan on Monday we are going to call Fox Chase about the immunotherapy drug Ipilimumab which I can now pronounce at lightning speed! I could probably even do it and chew gum at the same time (not that I chew gum…). IP-PILL-LU-MU-MAB. Try it for yourself! It’s kind of satisfying to say actually, especially if you can say it fast!

Anyway, I want to go back to my renewed spirit and sense of calm. I KNOW that this is what I need right now the MOST in order to heal. I have not meditated or chanted for the past few days and I plan on increasing the frequency and duration and am also reading a book on healing energies that I think will be useful. I’ve read in books or on blogs about this peace and gratitude that can come with a cancer diagnosis and I’ve felt it at moments along the way but I now feel it intensely. I also have read that in order to have any kind of spontaneous remission, a profound shift in one’s outlook on life and emotional health is required and I believe that I am now having this transformation. Over the past months, I have felt regretful about some of the decisions I have made and harbored unnecessary stress that I know is harmful to the body. I have held grudges or felt negative towards people from my past and suddenly any hint of those feelings is now gone. Let me paint you another picture. The day after I heard about the PET scan a few weeks ago, Steve had just arrived and we decided to go to PS1. On the way there on the subway and at PS1 itself I saw a couple people I know from grad school and I cowardly dodged them (one time unsuccessfully…haha) because I just didn’t want to deal and in general always fear running into people in NYC. But these two people are very nice and were not worth avoiding. So then I got my payback later in the day from God or whoever (if you hear me talk about God now I hope you weird you out. I have been praying just like I asked all of you to do too!). Anyway, I was at dinner with Steve and some friends at this place in Greenpoint and at the end of our meal, I went to brush my teeth (of course) and I saw someone from grad school that I didn’t always get along with at the bar and my friend George was coming out of the bathroom so I told him about it and he asked if I wanted to wait for me but I said I would be OK. When I got out of the bathroom, I saw that he was not at the bar anymore but instead was being seated at the table next to us!!! We had already paid so George was able to bring my credit card to receipt to sign along with my coat and bag. So I escaped! But now, today, with this new feeling, I would gladly sit down next to him and have a conversation. No need to run away! This feels huge to me even if it just sounds like petty grad school antics. I feel a release from the negativity I experienced during grad school and instead feel an overwhelming sense of gratitude for the experience because of how much I learned and how it made me grow as a person. It may not have been fun and I may not want to be a graphic designer but it was an invaluable experience. And it led me on the path to go to LA and find a joyous albeit interrupted life there where I met Steve, Maura, Abe, Mindy, Leah and my other dearest friends out there. I wouldn’t undo that for a anything and I pray everyday to return to the land of palm tress and the Silver Lake Reservoir a healthier, gracious and wiser person. Or if I don’t make it back in body, I know I’ll be there in my spirit. Maybe I’ll be one of those crane birds that sits on the reservoir. Sorry, didn’t mean to go there but it happens.

Oh yeah, I’ll leave you with one more power punched shot of positivity! Yesterday, when I found out about the brain stuff, I realized that I keep hitting these incredibly unusual odds. First, the odds of getting this kind of aggressive cervical cancer is very rare, way way less than 1%. Next, getting a brain metastasis usually occurs in lung, breast and other cancer and only occurs in cervical about 0.6 to 1% of the time. So, I’m guessing that my odds at survival are somewhere in that percentile but if I keep on this track, I think I have a good shot at it! Right??? Three for three maybe? This drug Ipilimumab has a lot of potential and the studies suggest it’s working in HPV related cervical cancer so let’s get that drug into my newly placed power port ASAP!!! Yeah!!!!! Finally, I ordered this as a present to myself so I thought I’d share. Rilakkuma is my bestie! I think I’ll wear it with a turtleneck channel my beloved Nana who took care of me growing up. She always wore sweaters like this with turtlenecks and long necklaces. Oh how I miss her so! Love to you all and thanks for all your prayers, messages and support! xoxo Lauren 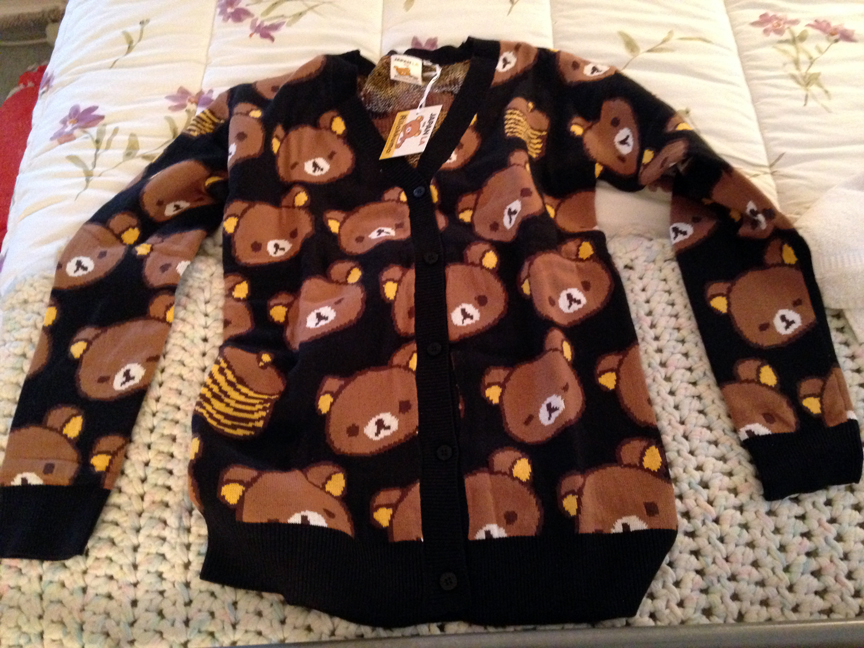 14 Responses to Let Me Paint You a Picture