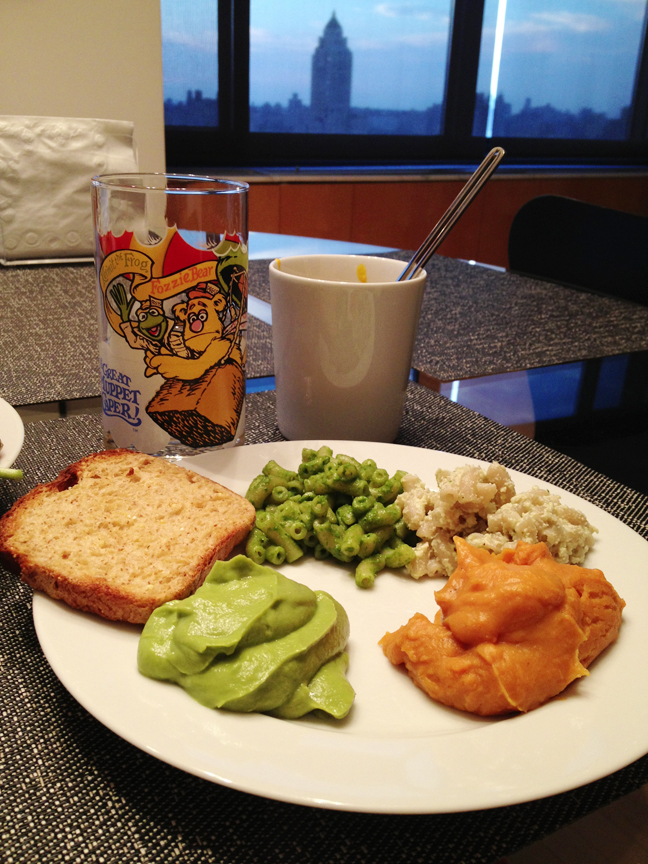 Hello! So my tooth is getting better! Woohoo! But to be safe I asked Rachel to prepare mostly pureed and mushy foods this week. This was my dinner the other night and I couldn’t stop laughing at how ridiculous it looked. Am I now eating adult baby food? Disclaimer: I totally ate Plum baby food on the plane ride back from LA a few weeks ago… So the green mush is an Avocado, Mint, and Pea puree that is lemony and delicious. I ate it on the gluten-free bread you see next to it. The orange mush is a recipe I copied from Erehwon in LA that I was eating non-stop because I couldn’t eat anything else. It is a puree of yams, almond milk, coconut milk and cinnamon. Delicious! It’s like dessert! And the Vitamix made it even better than what I bought at Erehwon! Ha! Then I asked Rachel to make Cashew Cheese from a recipe I found online adapted from Candle 79 (my home away from home) so that I could make Mac’n’Cheese (with brown rice pasta of course). I also asked her to make Kale Pesto with Sunflower seeds so that’s what the green macaroni Pasta is. She also made two soups. One is a Middle Eastern Lentil soup that reminded me of soup I used to get at Zaytoons in Brooklyn. It turned out so good. Here’s a shot of it with this amazing salad I made with Arugula, Heirloom Tomatoes and Lemon Cucumbers (!!!) I got at the Union Sq Farmers Market: 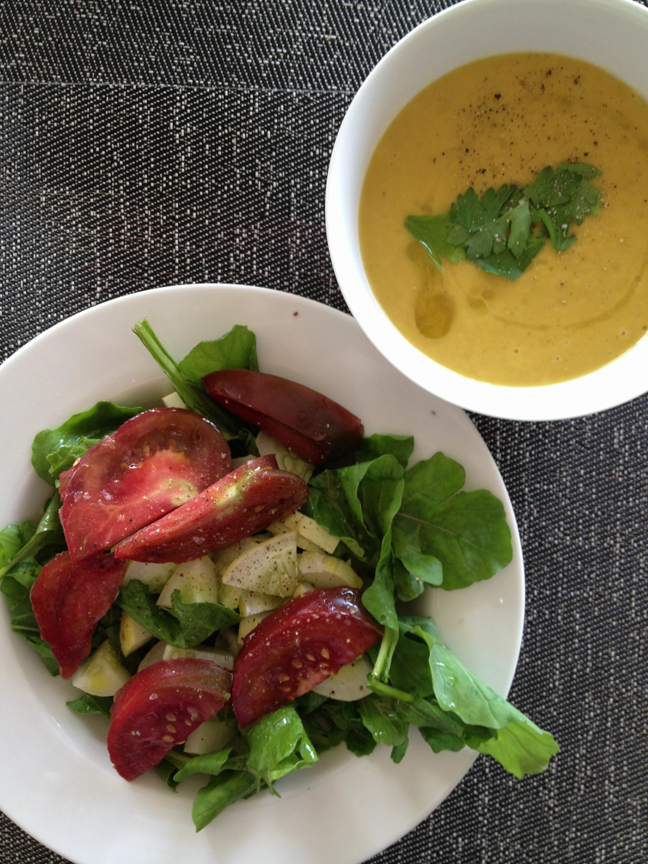 She also made this Carrot Tahini soup that sounded like an interesting variation on Carrot Ginger and it is very tasty! It’s not like anything I’ve tasted before and the color is magnificient! Sorry, I don’t have a photo of it somehow. I was reading in this book about how people with cancer who eat foods high in carotenoids (carrots, yams, beets, etc.) live longer. Although I struggle with that phrase “live longer” because it sounds like it implies they still don’t live very long. Or on the positive side it could just mean, they outlive their prognosis and are still alive. That’s my plan anyway. Sorry, I was having so much fun talking about food and now I’ve brought death into the conversation. I’ve actually been feeling less overwhelmed by the thought of it lately somehow. I think that the Taoist philosophy I was reading a few weeks ago has settled in and is blossoming in my mind. I’ve been thinking about the idea of acceptance and how I feel more able to accept that I don’t know what will happen and that’s OK. It’s a lot better than sitting around worrying. That’s for sure. But alas, I’m a bit under the weather right now with some kind of head cold or something. I’m hoping its not a sinus infection because I normally get those once a year or so and my immunity is pretty low right now so we shall see. I’m on antibiotics so maybe that’s helping? Or hurting? I don’t know. I took a nap this morning and felt more energized after so hopefully I will keep getting better. And my new Himalayan Salt Rock Lamp is surely helping too! If I am feeling OK, I am going to Fire Island this weekend where I was hoping to set up an Indigo Dye Bath. We shall see what happens! Love to All! xoxo