Hello again. So I did not coin the phrase “Operation Save My Ass.” It comes from Kris Carr, the amazing cancer activist, foodie, and goofball, who I’ve been a big fan of these days. Anyhoo, the past week has been incredibly overwhelming and challenging for me but I am hanging in there. Steve’s presence has helped me stay afloat during my hardest moments. So on Monday we met with the doctor in the clinical trials department at Sloan. He was very informational and matter of fact and didn’t have the most encouraging tone in terms of what my options are. He explained to me that these genetically targeted drugs are so new (only a year old) that they really have no idea how or why they work yet. He said that some mutations are clearly drivers of the cancer while others seem to be passengers. In other words, the drugs work by inhibiting certain gene markers and if the targeted gene is a “passenger,” inhibiting it would not stop the growth of the cancer. He said that my genetic mutation (which can occur in any kind of cancer) has had lukewarm response to the various targeted drugs and so it’s unclear whether it’s an important mutation to target. But it’s obviously worth trying. He explained that with clinical trials, you keep trying them until you find one that works and then you could stay on the drug indefinitely. He said there is a trial at Sloan for my mutation but there is a long waiting list (which he added me to). He also told me about another trial he thought would be a good option for me even though it was not targeting my genetic mutation because one other patient with cervical cancer responded to it. Yes, that’s ONE other person. So that’s what we are going on here? I guess it’s better than no one. That trial also had a waiting list but he thought he would likely be able to get me on it in 2-3 weeks which is when the chemo would be fully out of my system. You can’t start a trial while chemo is still in your system. He also recommended that I send my tissue sample from my diagnosis to a private company that will test me for an additional 236 mutations that will help point him in the right direction for what other clinical trials to try. He also recommended that I register with other hospitals that have clinical trials going on in case something opens up somewhere else. He referred me to a doctor at Mass General in Boston who I have an appointment with next week. I have a really good feeling about the doctor in Boston based on how incredibly kind and encouraging his scheduling nurses were over the phone. One of them told me that the doctor specializes in helping advanced cancer patients find targeted trials that work for them. Another factor is my wisdom teeth which I mentioned to the doctor on Monday. He told me I should get them out before I start the trial because the last thing I want is to have something go wrong with my teeth that would cause me to get kicked off the trial. But my teeth have been more under control lately and theoretically shouldn’t flare up if I am not on chemo. But I am so fucking sick of brushing my teeth after ever single thing I eat and would enjoy having the peace of mind that they are out of my life forever. Unlike the cancer, which is difficult to eradicate, eliminating my teeth and any potential issues would be one less thing to worry about. But I am so anxious to start a clinical trial ASAP since it’s very unnerving to know that you have cancer actively growing in your body. Plus, I’ve been having some spotting/bleeding down there that makes me super anxious (sorry for the TMI). So there’s a lot up in the air and I am impressed if you have read this far!

After we met with the doctor on Monday, I was overwhelmed with fear. In my head, I was terrified that I wouldn’t make it the 2-3 weeks until I could get on the trial. I actually had to ask my doctors this question and they told me of course I would and that I should just be careful crossing the street. So I’ve calmed down a bit about that but the whole fear of death issue is ya know, kind of right in front of my face right now. But again, Steve along with a vegan, gluten-free brownie sundae at Candle 79 acted a potent antidote to this fear: 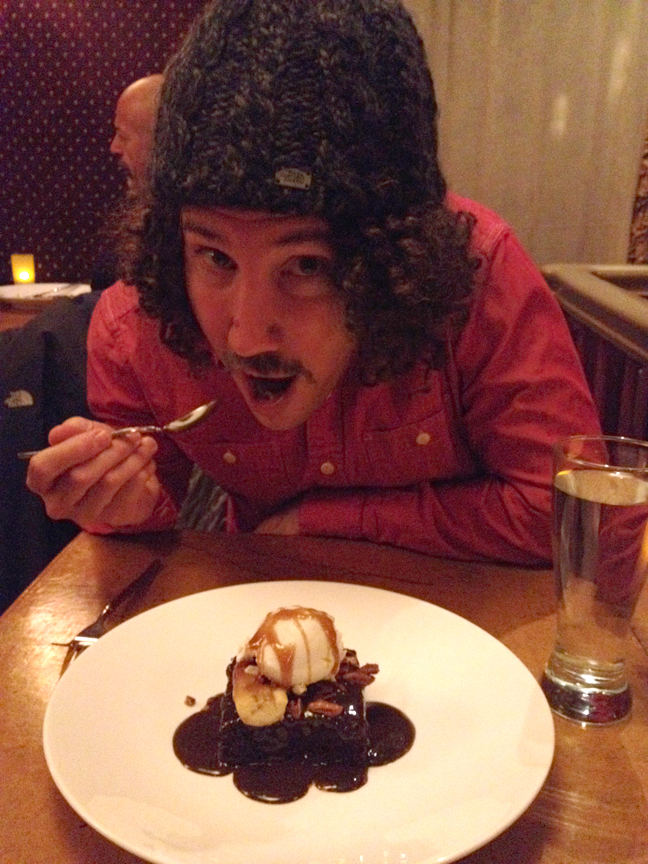 The clinical trials doctor explained that when you start a trial, it’s like a full-time job because you have to be there 2-3 days a week for 8-9 hours a day so they can monitor you very closely and see how the drug is interacting with your body. But even just making all these new appointments, registering at new hospitals and getting my medical files sent to the different hospitals over the past few days has felt like a full-time job too! Anyhoo, I am feeling more relaxed and calm today and tomorrow my parents, Steve and I are going to DC to celebrate Thanksgiving with my mom’s side of the family. I am so excited to see everyone. They are all so sweet and are making healthy recipes I’ve requested plus, gluten-free, vegan sweets! I know what I am grateful for! Talk soon! xo Lauren

7 Responses to Operation Save My Ass